WELCOME TO THE TEMPOSONICS BLOG

Here, you can find tips, tricks, and application stories about our sensor solutions. Learn more about the possibilities that our position sensors can offer to the industrial and mobile hydraulics sectors and how our transmitters support the liquid level business segment.

Sep 21, 2021
Within the production of metal plates, press brakes ensure that the metal gets the right shape. Temposonics linear position sensors play an important role in this, as they can be used to control the pressure on the metal and the movement of the press. How this works is explained in the following text. 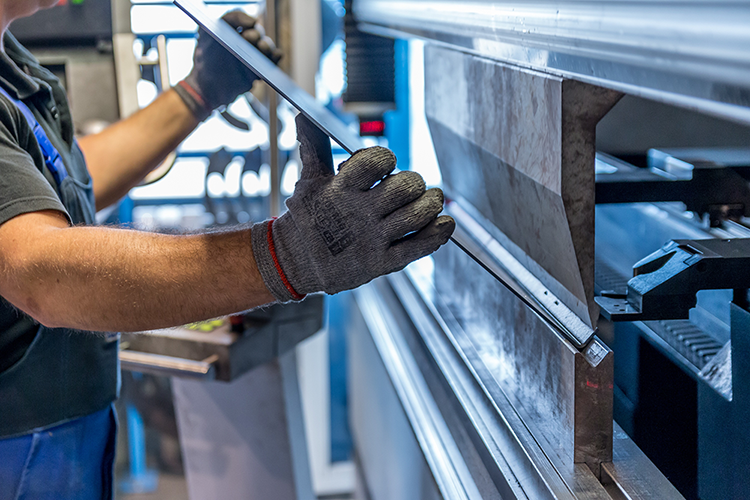 Close-up of a press brake.

In the production of metal plates, cutting the material is often followed by a press brake operation. The flat metal plates, such as sheet metal, are fed in and bent into shape for various end uses. This process is also called “cambering”. Temposonics R-Series V magnetostrictive position sensors are used to get an accurately formed metal plate with precise angle. The following text explains how the position sensors are installed and how they are used to control the work of hydraulic and electric press brakes.

The operation process of crowning is the same in both hydraulic and electric versions. A metal plate is inserted into the machine and placed over a forming tool with a V-shaped opening called the die. The punch tool is then pressed onto the plate from above, and the shape of the die's opening causes the metal to be cambered, giving it the desired shape for the particular application. Both tools used in the punch and the die can have different shapes to achieve different results. Depending on the width of the metal, it is also possible to use several tools side by side in the punch and die. In this way, the user can then bend a metal plate several times and avoid having to change tools.

In hydraulic crowning, the punch is controlled using two servo-hydraulic actuators. These are mounted on the sides of the punch hydraulics, which raise and lower the punch. This lifting and lowering mechanism is controlled by the sensors, so that it is possible to precisely regulate the distance and the pressure with which the punch presses on the metal.

An advantage with this technique is that the servo-hydraulic actuator and associated system require little hydraulic oil and yet it can bend with a lot of force. In addition, the actuator is very space-saving due to its individual components (without a separate hydraulic unit) and can therefore be optimally integrated into the press.

In this system, the R-Series V position sensors are integrated into the actuator cylinder and thus allow the punch to be controlled via the cylinder stroke of the hydraulic system.

The electric version of the press brake uses a special belt and roller technology in the punch. The punch is raised or lowered by the movement of the belts over the rollers. This system is in the complete upper beam of the press to enable uniform and precise pressing.

An advantage with this variant is that no hydraulic oil is used at all, but everything is electric. This enables a quieter and faster working process compared to hydraulic press braking, but with less force than achieved than with hydraulic presses.

The R-Series V profile version of transducers are mounted on both sides of the punch, allowing precise control of the distance and pressure of the punch during crowning.

Temposonics R-Series V position sensors are the ideal solution for controlling press brakes. By integrating them into the servo-hydraulic actuator or attaching them directly to the press system, the punch can be precisely positioned.

Due to the design and the measuring system used, the position sensors are perfectly suited to withstand the challenges of crowning. The mechanical design of the sensor is robust for shock (up to 150 g) and vibration (up to 30 g) and operates with a wide temperature range (from -40 to +85 °C).  In addition, contamination does not impact the quality of the position measurement, which measures with a resolution of 0.1 µm (depending on the output). The measurement signal remains reliable and accurate throughout the punch movement for precise control.

An important advantage for the use of displacement transducers in press brakes is that they require no start-up time. Other measuring systems, such as incremental position measurement with glass scales, have a start-up time in which the sensors must be brought up to temperature. In addition, they must first set a reference point and can only begin with the actual position output afterwards.

The Temposonics R-series V measure an absolute distance and therefore have additional safety compared to incremental measuring systems, because no pulses can be "lost" due to possible disturbances, which then require a new calibration run. Due to the contactless measuring technique, the sensors are also wear- and maintenance-free and thus guarantee a long service life.

A simple but important point that speaks for the use of linear position sensors is the cable routing in the press brake. In the case of glass scales, the cable of the evaluation electronics is mounted on the sensor, which in turn is attached to the punch. This means that as soon as the punch lowers during a press, the cable moves with it, and there can be a risk of the cable being kinked, bent, or otherwise damaged. In extreme cases, this can lead to a failure of the machine or even to a safety risk for the user.

If position sensors are integrated in the press, the cable routing is different.  During the press operation only the position magnet moves with the punch rather than sensor electronics or cable which are located with the sensor housing in the punch holders or in the servo-hydraulic actuator. This has the key advantage that the cable can be firmly secured and protected instead of moving with the punch.

All of the above make Temposonics R-Series V sensors the ideal solution for use in press brakes. They enable simple but highly precise control of the tools, which in turn leads to fewer incorrect pressings. Due to the robustness and fast deployment capability of the position sensors when (re)starting the press, the production chain is only interrupted for as long as it takes to change the tools.

GET IN TOUCH WITH US

You have a question about one of our products or would like more details on a possible application?
Click here to fill in our request form

Don't want to miss out on the latest blog updates and other news?
Click here to subscribe to our newsletter

We live by the promise of unparalleled service that enables us to take all available means to exceed your expectations.
Click here to find out how we support our customers