WELCOME TO THE TEMPOSONICS BLOG

Here, you can find tips, tricks, and application stories about our sensor solutions. Learn more about the possibilities that our position sensors can offer to the industrial and mobile hydraulics sectors and how our transmitters support the liquid level business segment.

The 5th Generation – The History of the R-Series

Nov 18, 2021
The new generation of the R-Series has the suffix V. Because the R-Series V is not only supposed to differ from its predecessor R-Series in its improved features, but also in its name. The character V does not stand for the 22nd letter of the alphabet but for the Roman number V = 5. But why V or 5? This question is answered by Dr Olaf Kissing, Product Manager Industrial Sensors at Temposonics.

The beginnings of magentotrictive positon measurement

To answer this question, let’s go back to the beginnings of magentostrictive position measurement. Several effects occur during magnetostriction. These effects are named after their inventors Matteucci, Joule, Villari and Wiedemann, who recognized these specific reactions in the middle of the 19th century. It was not until 1975 that Jacob Tellerman used the principle of magnetostriction to develop a magnetostrictive position sensor. In the same year he founded Temposonics Inc., which produced and sold this position sensor. This sensor, which was operated with an external evaluation electronics, was also known as Temposonics I.

The name Temposonics is a combination of the two terms tempo and sonics and briefly describes the magnetostrictive measuring technology: tempo (Italian for time), because the position determination is based on a time measurement, and sonics, because a sonic wave enables the measurement (click here for a detailed description of the magnetostrictive measuring technology).

In 1984, MTS Systems Corporation acquired Temposonics Inc. and founded MTS Sensors Division. This new company further developed the magnetostrictive position sensor and introduced the sensor Temposonics II in 1989. The name Temposonics was retained as the brand name. The evaluation electronics of this sensor was included in the sensor electronics housing. There were still variants available where the evaluation was carried out via external electronics, as before. 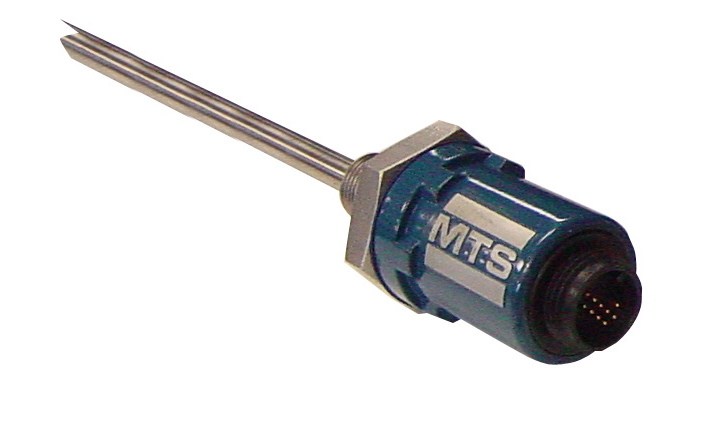 The next major step was taken in 1997 with the position sensor Temposonics III. In the further development this sensor was also called R-Series. These position sensors were offered as rod version and profile version. A special feature of the rod version was the replacement of the base unit. This made it possible to replace the sensor in a hydraulic cylinder without having to open the hydraulic circuit and to drain the hydraulic oil. In addition, the models RD4 with detached electronics and RF with flexible measuring rod were available for the first time. The available outputs were also extended. In addition to the analog outputs (current and voltage) and digital outputs (start/stop and PWM (Pulse Width Modulation)) known from Temposonics II, outputs such as SSI (Synchronous Serial Interface), DeviceNet and PROFIBUS were also available. 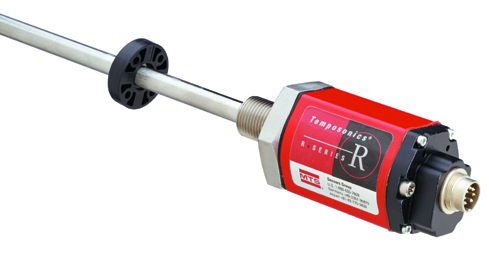 The revision of the R-Series in 2004 represents the fourth generation of this position sensor. The sensors could now be programmed by the user on site and parameters such as the measuring direction or the start and end position of a measurement could be adjusted. For status and error indication of the sensor, an LED was installed in the lid of the sensor electronics housing. Further outputs such as EtherCAT®, EtherNet/IP™, POWERLINK and PROFINET were also implemented.

The Temposonics® R-Series V or the 5th generation

Thus, the R-Series V is the fifth generation of the Temposonics position sensors. With these sensors, additional status values are collected and reported for the first time. Another innovation in this generation is the TempoLink® smart assistant. This device can be used to read out the additional status information of R-Series V sensors on site and to adjust sensor parameters.

The R-Series V with the TempoLink® smart assistant

The history of Temposonicsposition sensors shows how the sensors have been adapted and expanded over time to meet the changing requirements from the industrial environment. The long history also demonstrates that the sensors are proven and established in the market. This is due, among other things, to the fact that users can rely on the performance of Temposonics position sensors in their various applications.

GET IN TOUCH WITH US

You have a question about one of our products or would like more details on a possible application?
Click here to fill in our request form

Don't want to miss out on the latest blog updates and other news?
Click here to subscribe to our newsletter

We live by the promise of unparalleled service that enables us to take all available means to exceed your expectations.
Click here to find out how we support our customers